John Bassi is a 20-year veteran in Law Enforcement. John started his career with the Berkshire County Sheriff’s Office in 1997 and transferred to the Lanesborough, MA Police Department in 1998. John worked as a Patrolman in the small rural Town of Lanesborough until 2005, at which time he transferred to the City of Pittsfield, MA, where he is currently employed and assigned as a Crime Scene Investigator in the Department’s Detective Unit. During his tenure at the Pittsfield Police Department John has worked in a variety of divisions including, Street Crimes, Bike Patrol, Special Response Team and is involved in many Community Policing Initiatives, most notably the Law Enforcement Torch Run for Special Olympics Program. As a Patrolman, John was a Field Training Officer for several years before being promoted to the Detective Bureau. John has worked as a Crime Scene Investigator for over nine years and during this time has worked many homicide investigations, robberies, sexual assaults, burglaries. John has attended a number of trainings in the areas of Basic and Advanced Fingerprint Processing, Classification and Comparison and is a fingerprint examiner. John also received extensive training at the National Forensic Science Training Center in Largo, FL in the areas of Basic and Intermediate Crime Scene Processing in addition to Biological Evidence Detection and Collection. John also has training in Crime Scene Photography, Evidence and Property Management and Death Scene Investigations. He is an Instructor at the Massachusetts Police Training Committee’s Springfield Facility and also at the MPTC Reserve Intermittent Police Academy where he teaches a four-day course on Criminal Investigations. John has also been a guest instructor at Berkshire Community College also in a Criminal Investigations. Additionally, John is an instructor with the Pittsfield Police Department’s Community Police Academy. John holds a Bachelor’s Degree in Sociology from Western New England University and a Master’s Degree in Criminal Justice from Boston University. He is also an active member of the International Association for Identification.

Michael Maddalena is a 24 year veteran of Berkshire County’s largest police department, the Pittsfield Police Dept. During his time with the agency, he's had the opportunity to work and train in several different capacities, gaining a wealth of knowledge across the law enforcement spectrum, in both the investigative and administrative fields.

Presently, Michael is a member of the department’s Command Staff as a Detective Lieutenant responsible for overseeing night operations of the Detective Bureau and Narcotics Unit. He has prior work experience as a Detective, investigating all types of major crimes. . While working in the Patrol Division, Michael was an SRT member where he trained in tactical operations. He worked with community policing and outreach programs He was one of department's first Field Training officers in the mid 90s and later became a Field Training Unit Supervisor, overseeing the unit.

Lt Maddalena has training and experience in the hiring of new police officers. He is presently the departments Background Investigation Unit Coordinator for all new hires. Lt Maddalena has testified before members of the Civil Service Commission regarding bypass appeal hearings. His work in this field has given him a wealth of knowledge relating to the hiring process of new police officers in the Commonwealth of Massachusetts.

Lt Maddalena holds MPTC instructor certifications in Leadership and Field Training. He is also is an MPTC First Line Supervisor Instructor and certified Staff Instructor. He earned his Master’s Degree in Criminal Justice from Boston University.

JD Hebert has been in the emergency response field for over 25 years. He currently works for the United Counseling Service in Bennington VT where he is responsible for emergency management for all 16 sites over 300 employees and 5000 clients.

In addition, he also works for Northwest Massachusetts Incident Management Team he holds several qualifications and has deployed to several large-scale events

JD has an Associate’s Degree in Emergency and Disaster Management and a Bachelor’s Degree in Public Relation form Rochester Institute of Technology. He is a Certified Advanced EMT and has experience training various courses that include Event Management, First Aid, CPR, Car Seat Safety, and Psychological First Aid.

JD has a very strong commitment to community service and volunteers countless hours to the following organizations.

He serves on the Western MA Incident Management Team where he holds the position of Liaison Officer and Public Information Officer. He serves on the Critical Incident Stress Management for Western Massachusetts and locally he served 14 years as Deputy Chief of Emergency Medical Services for the Lanesborough Fire Department.

John Soules is a graduate of James Madison University. He has a bachelor’s degree in English with a minor in Secondary Education. He also has a master’s degree in Criminal Justice from Boston University. John is no stranger when it comes to the classroom. He is an instructor for the Municipal Police Training Council, an In-Service Instructor for the Pittsfield Police Dept and an Adjunct Professor in the Criminal Justice Department at Springfield College.

John is a 19-year veteran of the Pittsfield Police Department. During his career, he was a member of the Berkshire County Special Response Team and was selected to be a Field Training Officer. From 2007- 2014 he worked as a Narcotics Investigator becoming a certified expert in the field. He also was a member of the Berkshire County Drug Task Force and New England Narcotics Officers Association. During his time as a narcotics investigator, it became clear he had a special talent in writing search warrants. His training, experience and education have led to him being highly respected and knowledgeable investigator and search warrant author.

In 2014, John was promoted to Detective Sergeant overseeing major crime investigations within the detective bureau. He has since been promoted to Detective Lieutenant where he leads the next generation of great investigators. Lieutenant Soules is part of a small group of individuals in western Massachusetts with advanced training, knowledge and skills surrounding advanced cell phone search warrants, social media and electronic correspondence matters.

Along with his technological knowledge, Jeff has written and executed numerous search warrants for cellular telephones, cell phone location information, social media accounts, buildings and vehicles just to name a few. Jeff has displayed his ability to utilize his reporting writing skills coupled with his knowledge of computer technologies to investigate numerous homicides, sexual assaults, robberies, arsons and many other violent crimes.

Jeff considers himself part of the “new age” of investigators with vast knowledge of the inner workings of social media, cell phones and criminal activity and challenges those around him to further their knowledge in these subject matters. As a detective, Jeff believes the world of law enforcement and criminal investigations will continue to advance, much like society, into the technological realm and believes all crimes, no matter how big or small, can be influenced in some way by cellular technologies. Jeff received his bachelor’s degree in Criminal Justice with a minor in Computer Programming from Westfield State University and also holds a master’s degree in Criminal Justice from the University of Massachusetts – Lowell.

Are you interested in becoming a member of our team?
More importantly, do you have an interest in making a difference in the professional goals of sworn personnel, those in the commercial world or those aspiring to get into the field of criminal justice? Contact us at (413) 269-8160 or by email at or . 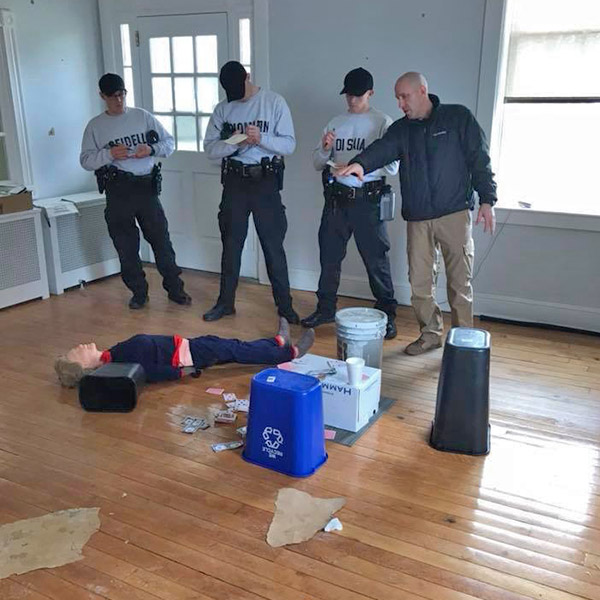